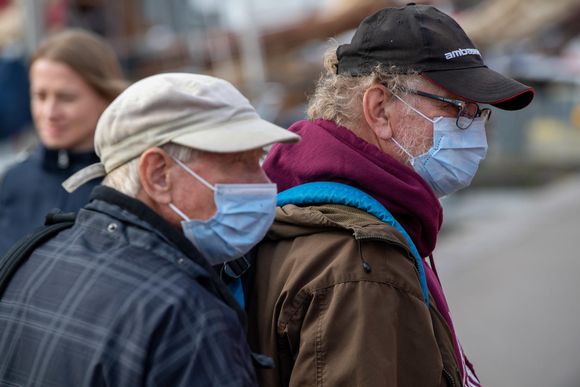 Agency: Ministry did not influence removal of face mask recommendations in April

There is a debate in Finland surrounding the Ministry of Social Affairs and Health’s role in not issuing official guidelines on the use of face masks by the general public as the coronavirus epidemic tightened its grip in the spring.

On Monday, the director of the Institute for Health and Welfare (THL), Markku Tervahauta, told Ilta-Sanomat newspaper that the agency wanted to issue guidance on face mask use in April, but said the ministry told him the advice was not needed.

At the time, THL said it was unable to issue formal guidance regarding the use of fabric masks as their safety could not be guaranteed.

However, independent of the agency, Tervahauta told newspaper Helsingin Sanomat in mid-April that everyone should wear masks.

On Monday evening, the ministry’s communications director Vivikka Richt tweeted on the ministry’s official Twitter account that its guidelines on face masks were issued via the Institute of Occupational Health (FIOH) at the beginning of April.

Following that tweet, the ministry posted a link to the FIOH site, showing the institute’s face mask recommendations were published on April 3.

However, FIOH ended up changing the information posted on its website as the ministry and THL announced that they were not issuing official recommendations on the use of face masks by the public.

Instead, in a joint statement published on 18 April, THL and the ministry warned about what it characterised as potential dangers of cloth masks. The press release said masks could, in the worst cases, increase the risk of infection and that use of the devices public places could lead to a false sense of security.

Agency’s advice on masks in April

According to screen shots of the FIOH website taken the previous day, 17 April, members of the public were being encouraged to use face masks in some situations.

“A face mask should be used in situations where it is not possible to avoid close contact, such as in shops and on public transportation. A face mask may reduce the spread of respiratory particles to the environment, which also reduces the chances that asymptomatic carriers of spreading the virus,” the website read at the time.

FIOH’s director general, Antti Koivula, said the ministry did not instruct the agency to remove guidance on the use of cloth masks.

“It did not affect [the decision to remove it]. It was based on what I said in an earlier Yle interview that we wanted to be in line [with THL and the ministry],” Koivula said.

“Of course, matters are always discussed with the ministry, but we did not have any external influence,” he said, adding that he made the decision to remove the recommendations from their site.

He said the only guidance the agency received from the ministry was a request to issue instructions on the correct use of masks and how a mask should be worn.

At the end of May, a working group led by the Ministry of Social Affairs and Health published a report that said widespread use of face masks have little or no effect on reducing the spread of upper respiratory infections

Meanwhile, THL has since updated its recommendations on the use of face masks by the general public, which state the “proper use of face mask can reduce infection by preventing droplets from spreading into the environment.”