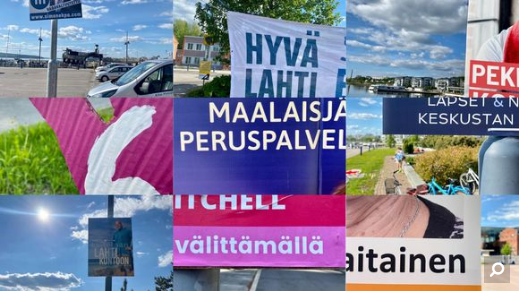 The importance of traditional election posters in Finnish elections has not diminished, despite this year’s municipal vote being dubbed the “social media election”.

Many candidates still believe in the power of putting up posters and signboards of themselves, and political parties have invested more heavily in the medium this time around.

“There are more election ads than ever before,” the Social Democratic Party’s (SDP) election manager in the city of Lahti, Hessu Moilanen, told Yle. “In some areas, there are so many election ads that they are indistinguishable. The visibility brought by the advertisements is a plus, especially as you can’t meet people because of the coronavirus pandemic.”

Candidates often pay for outdoor advertising themselves, and even install them during their own spare time, reinforcing the importance candidates give to the medium.

This is despite the fact that advertising campaigns on social media can be purchased for as little as 10 euros, and the platforms are the best place to reach younger people.

2021-06-07
Previous Post: Covid ‘is over’ in Norway, health chief declares
Next Post: Opposition parties do best in Latvia’s local elections