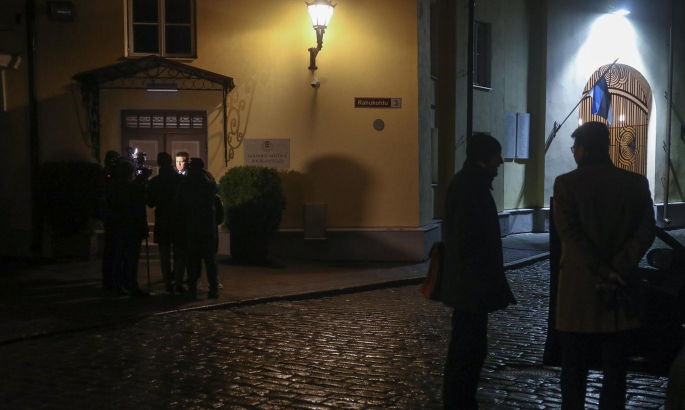 Prime Minister Jüri Ratas (Center Party) appeared before reporters in front of Stenbock House on Wednesday evening and said that all three partners are willing to continue in Estonia’s ruling coalition.

Minister of the Interior Mart Helme (Conservative People’s Party) will not be removed from office and the coalition agreement will remain in force, meaning that the referendum over whether marriage should be defined as being between a man and a woman will also go ahead. It remains unclear how the referendum will be organized or what will be its phrasing.

Ratas said that the sides to the coalition will meet again on Thursday because the crisis has not been fully resolved yet. The government sitting and press conference will not take place at the usual time on Thursday as the parties try to restore peace. “I want this coalition to continue and I feel today that all three partners agree. Everyone must take a step back if there is to be a compromise. I believe that the sides want to get there,” the PM said. Ratas added that all three partners agreed that incitement of hatred, discrimination and homophobia have no place in society.

Junior coalition partner Isamaa chairman Helir-Valdor Seeder said that the parties will try to agree on a way to avoid such crises in the future. “We would like to arrive at a solution for how to avoid tensions like what we have in the coalition in the future and how cooperation could take place without such incidents,” Seeder said.

EKRE comes out on top

Conservative People’s Party (EKRE) chairman, Minister of Finance Martin Helme gave the Center Party an ultimatum on Monday when he said the coalition will end if his father Mart Helme is forced to resign. “We will not be recalling Mart. If the PM decides to remove him from office, we will leave the coalition. If the Riigikogu expresses no confidence in Mart, we will also leave. This government will not continue without Mart,” Helme Jr. said. The chairman added that EKRE is also not backing out of the marriage referendum.

The marriage referendum will also stand. “I believe we can solve continued cooperation and the matter of the marriage referendum the details of which we did not agree on today. But I believe these matters can be discussed once peace has been restored. It is already included in the coalition agreement and no one needs to take any steps forward or back here, not to mention that no one has asked for it to be canceled,” Seeder said, adding that Isamaa is in the role of a balancer and mediator as needed.

There was no comment from Martin Helme who managed to avoid journalists, get in his car and drive to the ERR television building during Ratas’ interview. Therefore, it remains unclear whether EKRE had to surrender anything to get its way and what that could have been.

EKRE Minister of the Interior Mart Helme gave an interview in Russian to Deutsche Welle where he, among other things, suggested that gay people should run to Sweden where they are viewed more favorably. Helme’s answers were criticized by many, including the Center Party and PM Jüri Ratas. The latter prompted a response from Martin Helme on Monday who said that the coalition would fall if Mart Helme was forced to resign. Helme also criticized Ratas for a social media post where the PM condemned a government minister’s unfavorable view of sexual minorities. The crisis these events sparked continues.