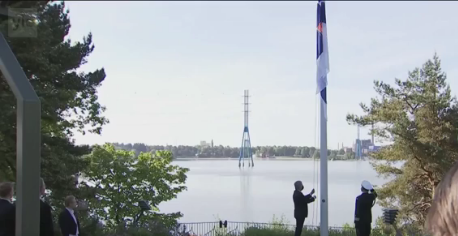 The flag day commemorates the birthday of national hero Mannerheim, who led the White forces during the Finnish Civil War and the FDF during World War II.

Due to the pandemic, the Flag Day of the Finnish Defence Forces (FDF) is again being observed on a subdued note on Friday, as it was last year. The traditional military parade, usually held on a rotating basis in various cities, has been cancelled for a second consecutive year.

Instead, the main event of the day was a concert performed by the Dragoon Band, which can be seen on Yle Areena as part of a roundup of the day’s events. The concert features heavy metal vocalist Jarkko Ahola, who sang a Finnish version of “A Salty Dog” by British rock band Procol Harum.

The official programme began under sunny skies with a flag-raising at Mäntyniemi, the official residence of President Sauli Niinistö in Helsinki’s Meilahti neighbourhood (video above). The president officially serves as the FDF’s Commander-in-Chief.

There was also a fly-over by four Hornet fighter jets, part of an ageing fleet that is to be replaced over the next decade.

That was followed by a wreath-laying ceremony at the Tomb of the Unknown Soldier at Helsinki’s Hietaniemi cemetery, led by Gen. Timo Kivinen, who has been Commander of the FDF since 2019.