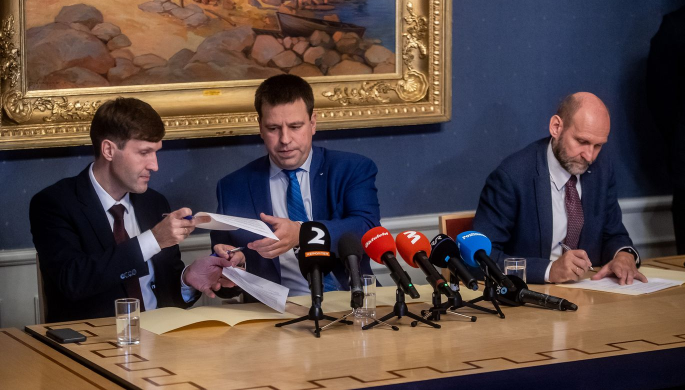 The statement will see the Conservative People’s Party’s (EKRE) marriage referendum moved up to take place in spring and urges everyone involved to engage in civilized debate and respect each other leading up to the vote. Ruling parties had praise for one another on Thursday and said the crisis has rendered the coalition stronger.

As a sign of good will from the partners, the controversial marriage referendum that was initially set to take place at the same time as local government council elections in October will be moved up to April or May. The precise phrasing of the referendum question remains open, while it will be held as a matter of national issue as opposed to a Constitutional amendment as the latter would require 61 votes in the Riigikogu to be initiated. The statement also urges the opposition, coalition, media and interest groups to engage in civilized debate leading up to the referendum.

This means that Mart Helme (EKRE) will remain interior minister and the marriage referendum will still go ahead. The referendum moving up is the only victory for the Center Party. “The coalition agreement initially said October, while the referendum will now take place in spring. I do not think it makes much ideological difference. While we can engage in political-technological speculation in terms of who will benefit from the change, the referendum taking place was paramount for us. Changing the timing was definitely one part of that compromise,” EKRE chairman, Minister of Finance Martin Helme said.

Even though the good will agreement reads that the sides will respect sections of the Coalition against discrimination and in defense of freedom of speech, EKRE will not condemn Mart Helme’s answers in a recent interview to Deutsche Welle nor admit they constituted a mistake. “No, there will not be an apology. This statement reiterates Estonia’s constitutional values. The latter are included in several sections of the Constitution. The document states that no one can be persecuted or discriminated against, while it also provides that everyone has a conscience and freedom of speech. Those things should not get in the way of one another in a confident and cultured society,” Martin Helme said.

He added that EKRE will not change its position. “We stand unwavering in the defense of our ideology and core values and definitely will not change. However, it is also in our interests for Estonia’s political culture to sport a high level and for debates to be businesslike.”

Prime Minister Jüri Ratas (Center), who described the past week as the most difficult political crisis of his career, said that he remains optimistic in terms of the partners sticking to the promises made in the statement. “The document has been signed and we have an agreement today. I proceed with optimism. However, it would be in error to think that there will be no more problems in the coalition and that it’s all smooth sailing from here. Coalitions always see sunlight, rain, rainbows, hail and snow, mirroring the seasons in Estonia,” the PM said.

Even though Ratas criticized Helme’s interview where the interior minister admitted he is unfriendly toward homosexual people, he did not demand Helme’s resignation or an apology.

Junior coalition partner Isamaa chair Helir-Valdor Seeder said that the coalition moving on together was the best possible outcome. He believes such crises can be avoided in the future. “I believe that people can grow. Communication becoming heated lied at the heart of this crisis. None of the three partners wanted the coalition to fall. What would be the alternatives? Are they better than the current government? There are no better options in the current composition of the Riigikogu. That is another aspect that forces us to move together,” Seeder said.

Martin Helme said that the crisis left the coalition stronger as it created new mutual understanding. “Ideological debates are often the fiercest and I suppose there were things we did not properly address during coalition talks. These debates have now brought us closer to mutual understanding and respect. The coalition is stronger today than it was a week ago. There is more trust today than there was a week ago,” Martin Helme offered.

2020-10-27
Previous Post: Scientists: strict lockdown might be necessary as early as November
Next Post: Cybercrime money-launderers nabbed in international police operation in Latvia and six other countries