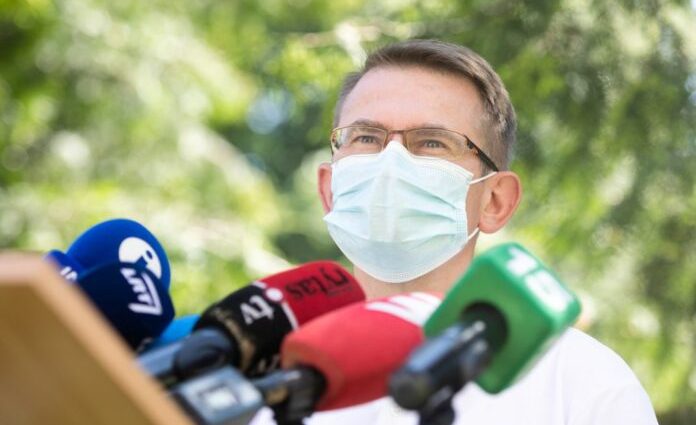 Lithuanian Government battles on two fronts. What will political fallout be like?

As the numbers of the Delta variant of the Covid-19 virus are on the rise in Lithuania, the country‘s authorities are stepping up the efforts to get more people inoculated before it is too late.

On Thursday, July 29, the country‘s Health ministry has sent out loud alarm messages, used to warn about emergency situations ahead, to all the populace, urging everyone to get a jab against the contagious virus in the nearest vaccination precinct.

«This is scary. I’d say the public warning system used to send exhortations to get vaccinated is simply abused. I believe it should be used only to warn about national-level emergencies, like intrusions of hostile foreign military, looming major natural disasters, say earthquakes, firestorms and so on. The Government is sowing panic by sending ear-piercing loud warnings to get more folks jabbed. One must be entitled to free will – to get the shot or not,» Andrej, a taxi driver in Vilnius, told the author of the article when the alarm system went on our mobile phones simultaneously while on the road.

He is one of many of the country’s so-called anti-vaxxers who speak out against the vaccination on every occasion and egg on others to bristle against it.

«Look, I am in my 60s and, with all the risks I am facing as the man of the age, contracting the coronavirus seems the least worrisome thing to me. I’ve hauled hundreds of people since the outbreak of the pandemic – many of them, and me too, were not wearing any protective mask, and – guess what? – I am still safe and sound,» Andrej argued.

He admitted he has not been jabbed yet and does not intend to get the shot – no matter what.

And at this moment let’s remember Lithuania have donated vaccines to such countries as Taiwan and Georgia . Was it a rational decision?

The Vilnius dweller says he is going to sue the state, the Government and seek justice in Brussels or at the Human Rights Court if nation-wide mandatory vaccination for all professions is imposed.

Andreij reiterated several times while speaking to BNN that he «regretted» very much for not being able to participate in the vociferous anti-vaccination rally in Vilnius last Saturday.

Among its organisers was Lietuvos Šeimų Sąjūdis (The National Movement of Lithuanian Families), that organised earlier the summer the much-debated march to what it called to protect traditional families against ostensible LGBT and Istanbul Convention propaganda.

But should anti-vaxxers be just ridiculed and looked down upon? Obviously not.

«We live in a society, where the Constitution enshrines freedom of speech and, yes, everybody’s right to do with his or her own body whatever the person wants. And that could be said about vaccination too. Unfortunately, vaccination resistance has been known for centuries now. It commenced with the first ever vaccine created by Britain‘s Edward Jenner who invented a method to protect against smallpox in 1796. It went on for decades and centuries and has not stopped until now. As much as I wish, it is very unlikely it will ever halt, particularly in the age of the social media,» Saulius Čaplinskas is a prominent epidemiologist and former director of Lithuania‘s Communicable Disease and AIDS centre (ULAC), told BNN.

The epidemiologist says he sees what he calls «politization» of the vaccination issue in the country. For example, Ramūnas Karbauskis, leader of the opposition Farmers and Greens Union, has not spoken clearly in favour of vaccination.

As of Monday, July 26, mandatory testing for Covid-19 came into force for people in many Lithuanian sectors, including catering.

They will be required to get tested for Covid-19 regularly unless they have been inoculated or have recovered from the coronavirus. All of them will have to get tested every seven to ten days. If a person refuses, they can be legally put on unpaid leave.

«As the order has just gone into effect, it is too early to speak what impact it will have on representatives of the professions. But frankly – this is my personal experience – every company, and those operating restaurants and cafés and other catering establishments in Palanga, has its share of anti-vaxxers. They are quite destructive often – we just need to face that,» Ingrida Valaitienė, president of the hotel and restaurant association in the resort town of Palanga, told BNN.

She says she has received her first jab and awaits the second one. In some catering establishment of the resort, the level of vaccinated people is quite high – even at 80-90 percent, against the average of approximately 50 percent country-wide.

«In our company, every 8 out of 10 workers got the shots. The majority understands the necessity of inoculation against the coronavirus,» Margarita Kerzaitė, director of café «Cepeliniškės» in Palanga, told BNN.

To prompt its patrons to get the jabs, the café has launched a much-talked-about PR campaign – persons who get vaccinated against Covid-19 in Palanga can come to the café the same day for a portion of free cepelinai, potato-meat dumplings.

Lithuania registered 380 new coronavirus infections and one death from Covid-19 over Wednesday, July 28, the country’s statistics office said. This is the biggest daily infection count since the beginning of June.

Lithuania’s 14-day coronavirus infection rate has risen to 91.4 cases per 100,000 people and the daily share of positive tests has edged up to 2.5 percent, according to the latest statistics. Overall, 282,039 people have tested positive for Covid -19 in Lithuania since the start of the pandemic, and the number of active cases has risen to 2,348 over the past 24 hours.

A total of 4,413 people have died from Covid-19 in Lithuania so far. The overall number of deaths directly or indirectly related to the coronavirus has reached 9,026. In all, 1.39 million people in the country, or 49.6 percent of the population, have been vaccinated at least once, 1.23 million have received two vaccine jabs.

«The Covid-19 pandemic coupled with the unabating migrant crisis on the Lithuanian-Belarusian border are «clearly» the biggest headaches the Conservative-Liberal Lithuanian Government is grappling with now», says Lauras Bielinis, a Lithuanian political scientist and a professor at Vytautas Magnus University.

«But in general, the Government is doing pretty well. The economy is withstanding the challenges well – I‘s say much better than other Western economies. I‘d give it a solid 6 for its performance on the scale of 10 points. It is clearly too premature to speak about any political fallout both to the Government and its ruling party, the Homeland Union-Lithuanian Christian Democrats, from the crises. But if the situations continue worsening on both fronts, the political damage can be inevitable,» Bielinis emphasised.