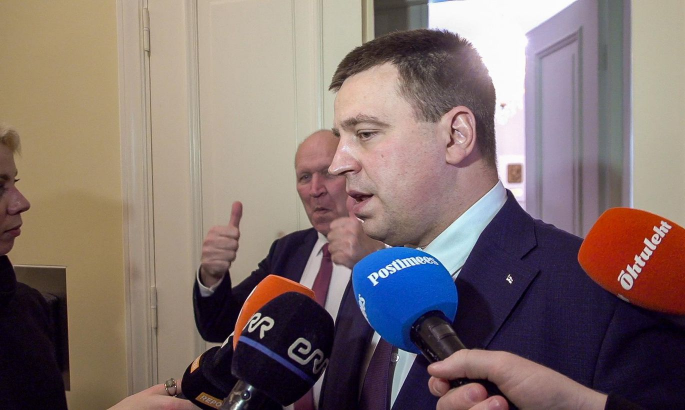 Prime Minister Jüri Ratas (Center) said that Helme’s resignation was a step of considerable political significance that allowed the coalition to stay together. The Riigikogu opposition that had been making preparations to bring a vote of no confidence against Mart Helme turned the motion against the national conservatives’ (EKRE) chairman Martin Helme, but the motion failed.

Mart and his son Martin Helme, who is serving as Estonia’s finance minister and heads the Conservative People’s Party (EKRE), said on Sunday that U.S. elections were clearly fraudulent and described Joe Biden as corrupt. The politicians also said in no uncertain terms that electronic voting in Estonia is not fair. This rubbed the national conservatives’ coalition partners the wrong way. Prime Minister Jüri Ratas called Martin Helme directly to condemn the statements.  “Members of the Estonian government need to be able to remain levelheaded when commenting on the domestic policy of allies. Mart and Martin Helme must immediately cease undermining Estonia-U.S. relations,” Ratas then wrote on social media. Mart Helme had decided to resign by Sunday evening.

While it seemed like just another government crisis at first, things had escalated by Monday morning beyond what was caused by Mart Helme’s derogatory statements about homosexuals three weeks ago. In addition to the Center Party, Helme’s criticism of USA also irritated junior coalition partner Isamaa and its security stance.

“We cannot continue like this in a coalition where we need to solve both domestic and foreign scandals every single week. It is not sustainable,” Isamaa leader Helir-Valdor Seeder said before Mart Helme tendered his resignation.

Instead of coming up with an ultimatum, EKRE yielded this time. “I decided to resign, looking at the avalanche of slander and lies produced by the Estonian media. I’m simply sick of it,” Mart Helme said, emphasizing that he has done nothing to harm Estonia’s national security and that past criticism of Trump is what needs to be treated as having violated Estonia-U.S. relations.

Mart Helme said he would be returning to the Riigikogu. The Office of the Riigikogu said that his alternate member Urmas Espenberg will be forced to leave the parliament. Helme will not be replacing Henn Põlluaas as speaker and Põlluaas said it has never even been discussed.

PM Ratas stepped in front of journalists after the coalition council meeting at noon on Monday. Passing by behind him was Mart Helme who was visibly in high spirits and showed the press two thumbs up. Ratas said that Helme’s resignation solved what was yet another government crisis. “It was clear after the talk show and those statements that I saw no way of moving forward without changes. I believe it was the right decision,” Ratas said.

According to the PM, Helme’s resignation and fellow EKRE member Urmas Reitelmann’s removal from the supervisory board of public broadcaster ERR after the latter had referred to its employees as sodomites shows that the good intentions agreement between the sides to the coalition remains in effect and that words have consequences. Right now, that consequence was Helme’s departure from the government to allow the coalition to continue.

Martin Helme also said that the good will agreement against discrimination and regarding free speech remains in effect and serves as a guide for the government going forward. He added that Mart Helme is resigning because he wants to be able to speak freely in the future.

When asked by a Postimees journalist whether there is free speech in the government, Helme said that it turns out there is not. According to Martin Helme, the problem is with his father’s style rather than the meaning of his words. The EKRE leader also said that the Helmes will not be giving up their Sunday talk show.

A source close to the government said that the “Räägime asjast” talk show has been a source of tension in the coalition from the first. The partners would find cooperation much easier if it did not exist. Mart Helme said on Monday that he cannot be muzzled. “No one will muzzle me, neither the prime minister, the president, the Riigikogu faction nor the press. I will say what I believe is right and what is on my mind, and no one will shut me up,” Helme said, adding that he only resigned so as not to jeopardize the government’s work, including the spring marriage plebiscite.

Search for yet another minister

If the opposition had initially intended to bring a no-confidence motion against Mart Helme, it was aimed at his son Martin after the former announced his resignation. The finance minister told the Riigikogu before the motion vote: “Do your worst, Mordor.” The vote failed as it did in September, with 46 MPs for and 54 abstaining.

Two Isamaa members who talked to Postimees said that they are not interested in dismantling the coalition. They said that the Reform Party would be a poor substitute for the current coalition and described it as untrustworthy.

Center MP Oudekki Loone, who also criticized the Helmes, said the party’s Riigikogu group did not have a hard time deciding what to do. “On the one hand, we saw EKRE take responsibility for the statements made on Sunday. On the other, it has been unsettling to watch the Reform Party abuse what is one of the most serious tools of parliamentary democracy – a no-confidence motion – on numerous occasions now,” Loone said and referred to the vote as a farce.

Martin Helme will now have to find the second ministerial replacement in one week after the resignation of Minister of the Environment Rene Kokk. “As I told the party council on Saturday, readymade ministers are not easy to find as they are not sold in supermarkets. Every ministry has its own requirements that need to be observed. But I’m sure I will find a good candidate,” Martin Helme said when asked whether he has a candidate for the post of interior minister lined up.

However, rank and file members of EKRE seem to be somewhat dissatisfied with how ministerial candidates are picked. They feel that the party’s leaders only trust a very close circle of persons, leaving competent people cut off from the food chain. EKRE members from outside its Riigikogu faction said that the Rain Epler vote (to set him up as candidate for environment minister – ed.) in the party council showed that members are no longer loyal to the brass in every single matter.