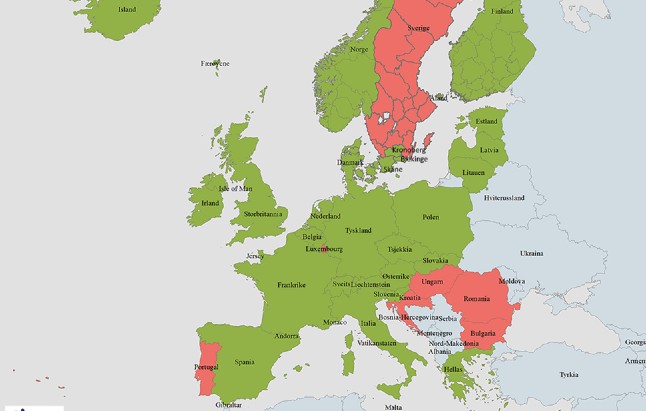 Norway has opened up for leisure travel to and from all countries in the EU and Schengen area except for Bulgaria, Croatia, Luxembourg, Portugal, Romania, Hungary, and most of Sweden.

This means that residents of Norway will be able to travel to sun-soaked holiday destinations in Spain, Greece and Italy without having to spend ten days in quarantine on their return.
Residents of all EU and Schengen countries will meanwhile be able to enter Norway, although those of the seven “quarantine” countries will need to spend ten days in quarantine on arrival, according a new page on the website of Norway’s Directorate of Immigration, and a press release issued by the government.
The only regions of Sweden which are currently rated “green” by the Norwegian Institute of Public Health are Skåne, Kronoberg and Blekinge, with the criteria now changed to bring in line with that used by Denmark.
Frode Forland, director at the National Institute of Public Health, warned people in risk groups to be especially careful when travelling abroad, to keep an eye out for local outbreaks, and to follow the advice of local health authorities.

“Opening the borders will entail an increased risk of importing infection to Norway, and thus a risk of contagion within Norway,” he said.

At the press conference, Norway’s commerce minister Iselin Nybø said that she hoped the return of German tourists would help the Norwegian hospitality industry recover, with German and Dutch tourists together spending about two million nights every year at Norwegian hotels and campsites.
“The German market is particularly important for tourism,” she said. “The summer is not over yet. In many of the countries we are now opening for, August is the big holiday month. If the infection situation remains as it is now, Norwegian tourism companies will have more guests over the late summer, in August and September.”
As for Norwegian holiday-makers, she stressed that they should not see the new guidelines as actively encouraging them to travel abroad.
“The new advice is not an invitation to travel,” she said. “Each individual must think carefully about whether it is necessary to travel. The infection situation in Europe can change quickly.”
The prospect of foreign tourists returning was welcomed by those in the Norwegian travel industry.
Terje Mosne, who runs Solvåg Fjordferie, which leases holiday cabins to most foreign clients, told NRK that his cabins had already been booked by foreign guests betting that borders would open in mid-July. If the government had not in fact opened up, he would have lost 90 percent of his income.
“It is a relief,” he told NRK. “Many German guests have called several times to find out if they can come, but I have not been able to guarantee anything until now.”
2020-07-15
Previous Post: Poliisibarometri: Suomalaisten luottamus poliisiin on heikentynyt
Next Post: Protecting Europe with dams across the North Sea