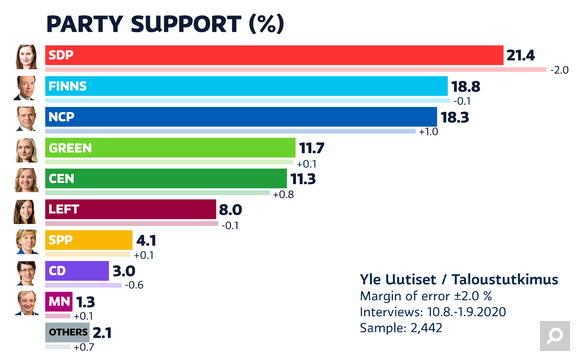 The poll is the first since Marin took over as SDP chair from predecessor Antti Rinne at a party convention held in Tampere, and the polling period also coincided with the announcement of the closure by forestry firm UPM of the Kaipola paper mill in Jämsä, central Finland.

Research Manager Tuomo Turja from pollster Taloustutkimus said support for the SDP began to drop during the last two weeks of August.

“The decline in SDP support this time comes almost exclusively from the retired and over 65 age group. Support for the SDP among the elderly population has fallen very clearly,” Turja said.

Marin’s comments on Yle TV1’s Ykkösaamu chat show on Saturday, when she questioned why UPM would close a profitable paper mill during “Finland’s worst postwar crisis”, also proved unpopular with the business community as well as supporters of the opposition National Coalition Party (NCP).

Despite the drop in support, the SDP remains the most popular party in Finland, even as competition intensifies between the two main opposition parties — the NCP and the Finns Party.

The NCP saw their support rise by one percentage point — from 17.3 percent to 18.3 percent — while the Finns Party held steady at 18.8 percent.

Both parties will look to build on that momentum during the upcoming autumn, as the NCP aims to challenge the government’s proposed employment measures while the Finns Party will seek to debate the EU stimulus package agreed by the Prime Minister in June.

“The NCP has received more support, especially from young people and working age men. Regionally, the NCP’s support has strengthened in the party’s strong areas of southern Finland,” Turja said.

Support for Centre up slightly up ahead of leadership vote

The latest Yle poll also suggests that the Centre Party’s leadership race between current chair Katri Kulmuni and Minister of Science and Culture Annika Saarikko, which is set to be decided by a party vote this coming weekend, has not significantly impacted voter sentiment.

Support for the Centre Party did increase by 0.8 percent to 11.3, but is still a long way from the 17.5 percent of the vote the party captured at the 2017 municipal elections.

Among the other government parties, support for the Greens, the Left Alliance and the Swedish People’s Party remained virtually unchanged.