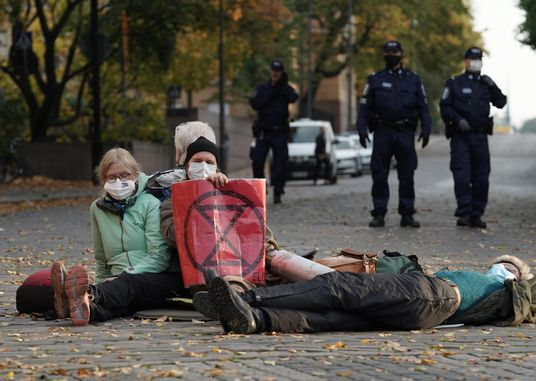 Demonstrators were removed from the street after they sat down and blocked traffic.

Several police are being investigated over claims of breach of official duties, but prosecutors have now added assault suspicions to their preliminary investigation into police actions to end a demonstration by climate activists that blocked traffic for several hours in central Helsinki.

In early October a group of Extinction Rebellion activists sat down in the road in Kaisaniemi. Police attempted to move them on through persuasion, but in the end resorted to the use of pepper spray. Video of the incident spread rapidly on social media.

State prosecutors launched an investigation in mid-October, at first into allegations officers breached their official duties. In the course of the investigation, however, allegations have emerged that they also assaulted protesters.

“It became apparent that there is reason to also look at matters relating to a possible assault charge. That is to protect the rights to justice of both parties.”

Iltalehti was the first media to report on the assault charge aspect of the investigation.

2020-12-10
Previous Post: Finland may get coronavirus vaccine before year’s end, but no return to normal in sight
Next Post: Defence forces survey: Appetite for national defence and conscription has declined