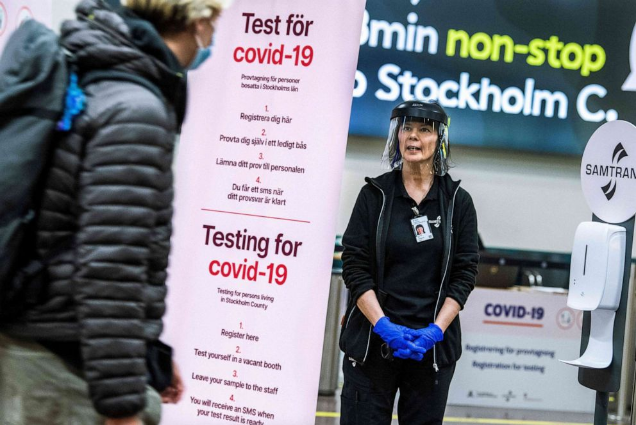 Sweden has avoided a COVID-19 lockdown so far: Has its strategy worked?

Sweden’s novel approach to tackling the coronavirus pandemic has drawn both praise and fierce criticism, not just inside the Scandinavian country, but across the Western world. The country has so far resisted going into lockdown, unlike the rest of Europe, even during the peak of its second wave over Christmas.

In doing so, Sweden has become a lightning rod for those in favor and against stricter social distancing measures. For some, its significantly higher COVID death rate compared to its neighbors is proof that lockdowns are essential to combat the spread, while for others, the comparative openness of Swedish society proves that a “balanced” approach to the pandemic is possible.

Now, a year into the pandemic, and with a vaccine rollout likely in the near future, their strategy continues to attract international attention. ABC News looked at the pitfalls and merits of their approach in May last year, and a year later, the evidence shows that now, as much as ever, their unique approach offers invaluable lessons to the international community for living in the long term with COVID-19.

Denmark, Norway and Finland, with a combined population of around 16.75 million, have recorded 4,331 deaths attributed to coronavirus as of Thursday (259 per million). All three enforced lockdowns early on in the pandemic. Sweden, by contrast, has registered 12,798 deaths, and possesses a population 10.2 million, meaning it has a far higher death rate than its immediate neighbors (1,255 per million), according to Johns Hopkins University data.

For critics of the light touch approach, such as Stefan Hanson, a Swedish infectious diseases expert, such a high death rate is evidence of the failure of an overall strategy.

“The basic problem is there are no clear plans,” he told ABC News. “From the start, there never as have been. Normally when you run a public health project, you have some aims and strategies, you have some goals and you follow up, you have a monitoring system to see how things are going. But in the case of Sweden there has been nothing like that.”

“It’s all about having a low transmission. And Sweden hasn’t put that forward as a very important thing,” he added. In April 2020, Hanson was co-signatory to a letter from several top Swedish scientists criticizing the approach to the pandemic, which they said would cause “many unnecessary deaths.”

Yet even throughout Europe’s “second wave,” which saw Stockholm’s intensive care units almost run out of beds over the Christmas period, the country has resisted the temptation to lock down, being the only country in Europe to do so. December saw a very rare intervention from King Carl XVI Gustaf, who said the country had “failed” in its approach. The strategy, pioneered by Anders Tegnell, Sweden’s state epidemiologist, has been heavily criticized, not just at home, but abroad as well. False optimism that the capital, Stockholm, would reach “herd immunity” by fall has compounded that criticism.

Herd immunity occurs when there are enough people who have either been vaccinated or exposed to the virus that it can no longer spread in the population. Critics say that doing so by exposure to the virus creates unnecessary risk.

Yet as with so much of the data relating to COVID-19, proponents of the policy say that reading the data is a matter of perspective.

Sweden may be faring comparably better in terms of excess deaths — those greater than the usual number of deaths expected in a certain time period. Experts say excess deaths can indicate whether policies intended to combat the pandemic have unintended consequences, such as delaying treatment for other ailments and is an important measure of the overall efficacy of policy.

While still performing worse than other Nordic countries on data from Eurostat, the official European Union statistics agency, and the University of Oxford, shows that Sweden recorded 7.9% excess deaths last year compared to the years 2016-19, according to the independent health news site Dagens Medicin.

That means that the country had the 23rd lowest annual excess deaths out of 30 European countries — lower than the U.K. (15.1%), France (10.4%) and Spain (18.9%). Sweden also has a lower number of coronavirus deaths per million than those countries, all of which have gone under strict lockdowns during the pandemic. Pointing to the recent excess mortality studies, Nils Karlson, an economist and political scientist who jointly wrote an op-ed last year in Foreign Affairs entitled “Sweden’s Coronavirus Strategy Will Soon Be the World’s,” is more optimistic.

“There was some recent figures showing that if you count excess mortality, Sweden is one of the best countries in Europe,” he told ABC News. “And one of the reason is, of course, that we didn’t get the flu, just the ordinary flu, because we wash our hands. We have social distancing. We didn’t have as many car accidents. You know, all kinds of other stuff that that affects us didn’t happen this year.”

The resistance to lockdown, he said, is based on the idea that they are “unsustainable,” he said, and Sweden’s strategy takes into account not just economic factors, but all aspects of public life. While acknowledges the COVID death toll was too high, he said: “You have to keep society open not only for economic reasons, but also for critical public functions to to function, like hospitals, schools and so on. Schools are still open for younger kids… Otherwise, it’s remote learning. But I think it has worked fairly well.”