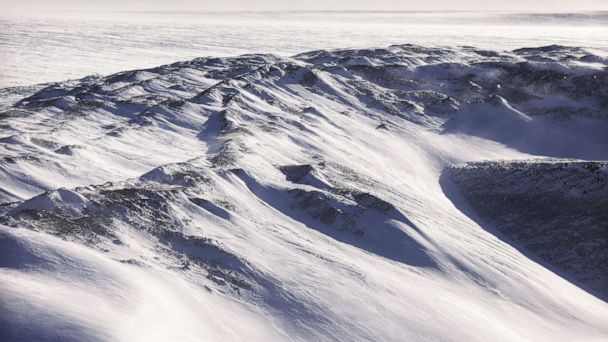 A senior US official said the ice melt was an “opportunity” for economic growth.

The U.S. State Department has named a new special envoy for the Arctic amid increased competition with Russia and China for influence in the region, which is facing some of the most damaging effects of climate change.

The new coordinator for the Arctic is the latest example of the Trump administration’s new interest in the region after it re-opened a U.S. consulate in Greenland and President Donald Trump ordered a new fleet of icebreaker ships.

The administration has also reversed efforts to combat climate change in the Arctic, including green-lighting drilling on once-protected U.S. territory in Alaska, and been accused of downplaying climate change and sidelining scientific study of it and its effects.Us actions in Arctic

“A few years down the road here, people are going to look back at this summer as being a pivot point in our diplomatic engagement, our approach to the Arctic and the beginning of what will be a sustained effort — comprehensive and integrated, with all the tools and levers that we have,” a senior State Department official said Wednesday.

The new coordinator, Jim DeHart, is a career Foreign Service officer who has served as the deputy ambassador to Norway and most recently led U.S. negotiations on burden-sharing agreements with allies like South Korea. His appointment began Wednesday, with a team of three officials and DeHart reporting directly to Secretary of State Mike Pompeo and his deputy Stephen Biegun, according to the official.

His appointment “reaffirms the commitment of the United States” to “ensuring a peaceful region where U.S. interests are safeguarded, the U.S. homeland is protected and Arctic States work cooperatively to address shared challenges,” the State Department said Wednesday.

Trump’s first Secretary of State Rex Tillerson essentially eliminated a similar position, special envoy for the Arctic, as well as one for climate change, in 2017, both of which were created under former President Barack Obama. The special envoy for climate change position has never been filled, nor has the administration ever nominated anyone for assistant secretary of state for oceans and international environmental and scientific affairs.

Pompeo has moved to increase the U.S. presence in the Arctic, particularly as a counter weight to Russia’s growing military presence and China’s efforts to assert itself through commerce and infrastructure projects. In a speech to the Arctic Council last year, Pompeo cast both countries as threats to the region’s peace and stability, without mentioning climate change.

The senior official reiterated that Wednesday, saying both countries are “big reasons why we need to be in the region, why we need to be visible and active ourselves.” They declined to share specifics of how DeHart’s new role will counter those presences, beyond “building a coalition among our close friends and allies in support of the principles,” like rule of law and transparency, that officials have laid out.

While the Trump administration has been criticized for being late to the Arctic, it has announced several new steps this year, in particular the White House memo Trump signed last month to accelerate the creation of a fleet of U.S. icebreakers for the region by 2029.

In May, the U.S. also opened a consulate in Greenland’s capital Nuuk, just weeks after announcing a $12 million investment for the island focused on mining and tourism. A territory of Denmark with limited self-government, Greenland was also in Trump’s sights last year when he expressed interest in purchasing it.

Trump even sparked a diplomatic spat with NATO ally Denmark over it, canceling a state visit with its queen after its prime minister rejected his offer.

Pompeo visited Copenhagen last week, where its Foreign Minister Jeppe Kofod told reporters “the issue of last year,” including a U.S. purchase, was not discussed.

Instead, after meeting with Kofod and Greenlandic Minister of Foreign Affairs and Energy Steen Lynge, Pompeo said the U.S. will work with them on “growing Greenland’s mining and energy sectors through transparent investment, helping manage land and fisheries, increasing tourism, and much, much more.”

But the development of more mining in the region has sparked environmentalists’ concerns, with the Arctic already showing some of the most prominent signs of climate change on the planet as it warms more than twice as fast as the rest of the world.

This week, all-time temperature records were set in Norwegian Arctic territory, including at the world’s northernmost inhabited settlement. Russia’s Siberia has seen record-setting temperatures in June and a summer of historic forest fires, whose smoke has blackened skies in parts of Alaska and whose carbon emissions hit record levels. Sea ice melt is on track to be nearly as bad and possibly even worse than the record set in 2012.

Instead of the threat posed by that ice and permafrost melt, the senior State Department official called the changing environmental landscape an opportunity, as Pompeo did last year.

In response to ABC News, the official said the administration doesn’t see those changes “as a good thing. … The environmental changes that we are seeing are enormously disruptive in all kinds of ways, so the reality from that is that it sort of opens up a mix of, I guess, opportunities, risks and difficulties. You know, it’s a complicated picture.”

Still, Trump’s environmental policies are said to be exacerbating that picture, especially rolling back regulations like fuel efficiency standards and waterway protections that will have long-term effects. More specific to the Arctic, the administration has moved ahead with plans to open up once-protected areas for oil and gas drilling, including on two-thirds of the nation’s largest piece of public land last month.

The senior official said the administration is committed to helping scientists and researchers “fully understand the impact and understand what is happening in the region, so that communities there, our citizens there can find solutions.”

“That’s where the best work is going on right now that we can be fully, 100% committed to,” the official added.