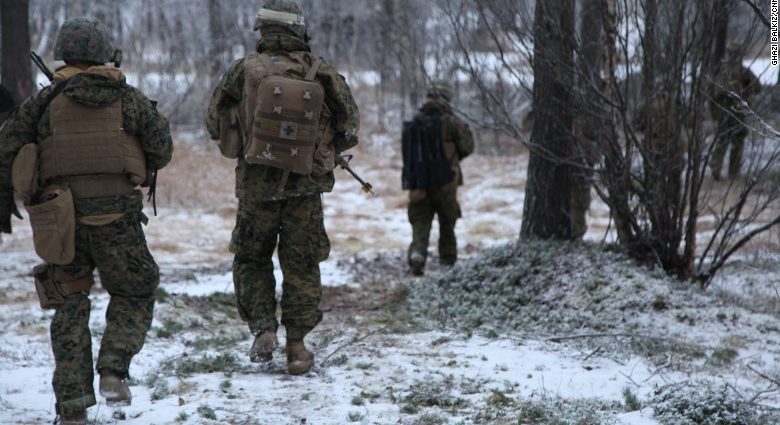 The US is ending the rotational deployment of some 700 US Marines to Norway, shifting to shorter more periodic deployments and focusing on training with the US Navy, a move that comes days after the Pentagon announced a major draw down of troops in Europe.The US Marine Corps says the change to the Norwegian deployment is unrelated to the troop cuts in Germany, that many have described as being a boon to Russia.”Marines will deploy from the United States to Norway for shorter deployments in order to better synchronize their training with Norwegian forces and to allow for increased opportunities for large-scale exercises of Marine Corps tactical units,” Maj. Adrian J.T. Rankine-Galloway, a spokesman for US Marine Corps Forces Europe told CNN.”This transition of US Marine Corps deployment models is unrelated to US force posture adjustments in Germany,” Rankine-Galloway added, saying the change was to allow the Marines to better integrate with the Navy and conduct “large-scale unit training as a naval expeditionary force.”

Since taking office last year the Commandant of the Marine Corps Gen. David Berger has prioritized better integrating his service with the Navy.In 2018, the US military boosted the number of US Marines deployed to Norway on six-month rotations to some 700 personnel. The deployment was seen as key to boosting the US military’s ability to train for Arctic warfare and has been cited repeatedly by NATO Secretary General Jens Stoltenberg as evidence of the American commitment to the defense of Europe.Norway shares a 122-mile border with Russia with the headquarters of the Russian Navy’s Northern Fleet sitting just some 70 miles from the Norwegian border.Moscow protested the increased US presence of US Marines in Norway, with one Russian politician saying that the move would cause Norway to be targeted by the Russian military.The Trump administration has criticized Norway for its failure to meet the recommended NATO target of spending 2% of its GDP on defense, with the country spending about 1.8%.

Norway “remains the only NATO ally sharing a border with Russia that lacks a credible plan to spend 2 percent of its Gross Domestic Product on defense,” President Donald Trump wrote to Norway’s Prime Minister in 2018.Rankine-Galloway said that the new training model will mean that “at times, we will have a greater number of Marines here than before” when the US military is conducting exercises.US Marines “will continue to train and exercise in Norway together with the Norwegian Armed Forces. The aim is to maximize mutual benefits in order to ensure the relevance of the forces in the changing operating environment of the 21st century.” a spokesperson for Norway’s Defense Ministry told CNN.But the move follows the Pentagon announcement of the draw down of some 11,900 US troops from Germany, returning more than half to the US in a move that drew bipartisan opposition.

2020-09-18
Previous Post: A New Arctic Is Emerging, Thanks to Climate Change
Next Post: Decision made in case against Arctic Oil in Norway: Right to a healthy environment acknowledged