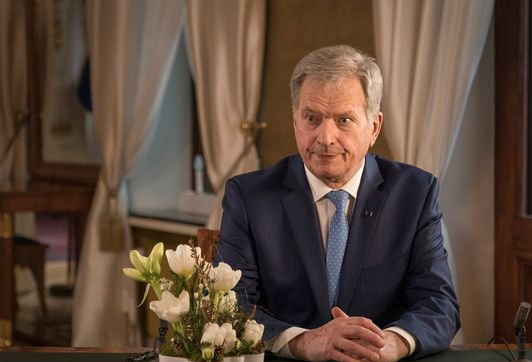 “We must find the strength to go on”: President addresses pandemic fatigue in New Year’s speech

By: Christian Jukka
In: News
Tagged: Finland, Niinistö
With: 0 Comments

President Sauli Niinistö addressed pandemic fatigue in his New Year’s speech on Friday, urging people to find the strength to carry on. He said hardship stemming from the virus was far from over despite vaccines beginning to roll out. Touching on vaccine hesitancy, Niinistö said vaccines will only improve the situation if people get the jab once it becomes widely available.

“Even if we already feel tired, we must find the strength to go on,” Niinistö said.

The president thanked healthcare workers in his New Year’s address on Friday, but also extended praise to the entire nation.

“This is something we achieved together,” he said, adding that Finland had coped relatively well in the pandemic compared to many other countries.

Niinistö said difficult times owing to the virus were not over despite vaccines beginning to roll out. “While vaccines have already given us some hope, even in the best case the exceptional conditions will continue for several months. Complying with the restrictions is the only way of getting rid of them.”

Bringing up Finland’s post war efforts in building up the welfare state, Niinistö called on Finns to move forward with a shared effort in mind in the face of uncharted territory.

Niinistö also dwelled on security–both at the national and individual levels.

The president touched on recent debate involving security considerations regarding Finnish women and children repatriated from the Al-Hol detention camp in Syria.

“To what extent can everyone’s safety and security be balanced against everyone’s right to security?” he asked.

The president was also troubled by the recent massive data breach involving private mental health services firm Vastaamo as well as by the cyber attack on Parliament.

“Our feeling of security has also been eroded by new digital threats. Whether the target is Parliament or individual citizens’ health data, the word ‘data breach’ is not strong enough to describe the problem.”

He said Finland must improve its ability to foil security threats both domestic and international. “We should never have to acknowledge that our policies have been naïve,” he said.

From corona to climate

The president said coronavirus has seen people in Finland adopt behaviors that were beyond imagination not long ago. These experiences could offer lessons in mitigating climate change.

“To avoid danger, we have modified our behaviour in ways that are difficult to believe. Could we learn something from this that would help us combat another danger, the threat of climate change? Because climate change is all about human behaviour.”